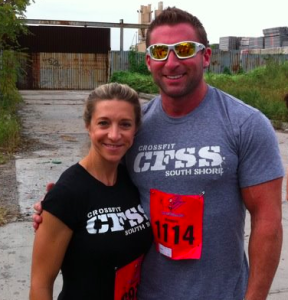 Doug Acker & Tara Krieger were brought together by fitness in 2002. In fact, if you ever think Coach Tara is tough on you – just imagine what Doug went through – she was his personal trainer before she became his girlfriend and business partner.

From day one, Doug was a fan of Tara’s coaching style, “I noticed her attention to detail immediately. The other trainers seemed to just be going through the motions or “clipboarding” it. Running through the list of exercises in a one size fits all kind of way. I really appreciated what a pain in the ass Tara was…Movement was going to be executed properly and she never used a one-size-fits-all approach.”

Doug, a lifelong entrepreneur and owner of United Chimney Corp., became a resource for Tara when she began to express her interest in opening a gym. (He also became her boyfriend).

Tara was passionate about opening a facility where she could provide the same care and level of training to every person who walked through the door. She wanted to know their goals and help them find a way to accomplish them. As she continued to search for more knowledge and different ways to approach fitness she found CrossFit – the solution she had been looking for.

“She kept inviting me to go try a class with her, but at first I didn’t show much interest,” says Doug.

“Not that I wasn’t bored with the usual bi’s/tri’s chest/back routine I’d been doing for last several years, I just wasn’t sure if CrossFit was for me. I finally gave in one Sunday and went with her. My first CrossFit workout was “Cindy”. Wow – was I surprised at my lack of fitness, it was an eye opener. It kicked my ass, but I wanted more. We went together the following Sunday- and then I went back on my own on Tuesday… And Wednesday… And Thursday… And that was it – hooked. Everything was being tested – and I was being challenged like never before. It all made perfect sense. It was exactly what I was looking for – even though I didn’t necessarily know I was looking for something.”

Together, Doug & Tara opened the doors of CrossFit South Shore in 2009. To this day, they still coach nearly ALL classes to help ensure that Tara’s standards of professionalism and experience are upheld. They’ve helped many people lose weight, gain muscle, and get healthy, but most importantly they’ve helped people find a place where they are happy & motivated to achieve their goals!